Full of phytonutrients and antioxidants, apple lives up to the proverb:

“An apple a day keeps the doctor away”

This wonderful fruit is jam-packed with vitamins and minerals like calcium; phosphorous; iron; and vitamin C, A, and E.

Serve up this comforting apple soup during the winter months to keep those flu-germs at bay, and to enjoy something delicious! 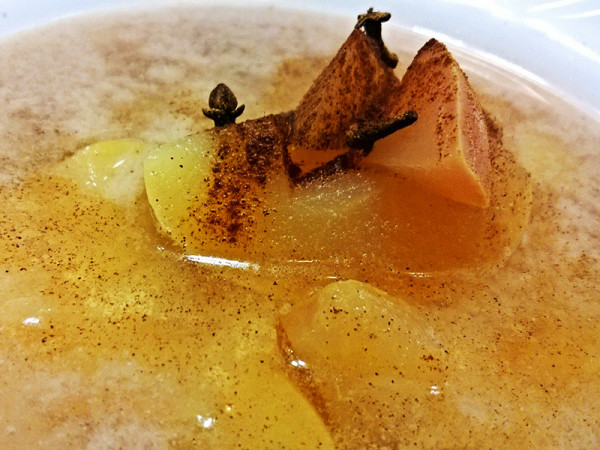 All of the ingredients

Season with cinnamon and cloves

- For extra flu-fighting properties, add ginger.
- You can use coconut cream instead of the cashew cream.
- For an extra refreshing summer soup, add a splash of lemon oil.
- Add walnuts and whole cinnamon, for attractive decoration with extra flavor.

Juicy apples are available throughout the year, so you can prepare this soup anytime, anywhere! During the summer, put the soup in the fridge for 2 hours, then serve cold.

It’s a delicious way to cool down when the weather’s hot!

Healthy and sound nutrition is a fundamental aspect of life quality, it is essential for a prolonged and active life. That was what I have learnt from my mother as a child, and still defines my daily life. I think veganism is one of the best choices to keep healthy, as long as you keep your dishes varied and balanced. By my recipes I support balanced diet, and deliver ideas for vegans and non- vegans alike. Just a quick glance on what to expect in the future: makeovers of regular dishes to vegan delicacies, traditional international dishes re-imagined in the vegan way, and desserts – because who doesn’t love desserts?! Peace on your plate!